Emperor
Guardian of the World Branch

Chapter 73 (hidden)
Chapter 74 (actual)
Hi Watari Himeookami Kukurinomikoto (氷 亙 姫大神 菊理命), more commonly known as Kukuri (ククリ), is a Kouu's younger sister. Originally thought to be a princess, she is later revealed to be the current emperor and Guardian of the World Branch of World Line O. 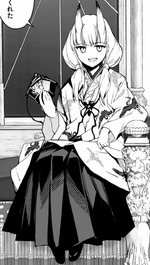 Kukuri has green eyes and long pale blue which she ties into two tails in the front, and has horns. Her casual wear consists of a pale green kimono with a frilly apron over it. Her official wear consists of what appears to be a miko kimono, a jacket with crane patterns over it, and a crown.

Befitting her age, Kukuri is childish, enjoying teasing Sudou Kaname and Karino Shuka. Despite her status she tends to secretly leave the palace and have fun in the city.

Guardian of the World Branch: As the guardian of World Line O, Kukuri has the ability to teleport people and give people sigils, which the people in the world line call koujinryoku.

Community content is available under CC-BY-SA unless otherwise noted.
Advertisement